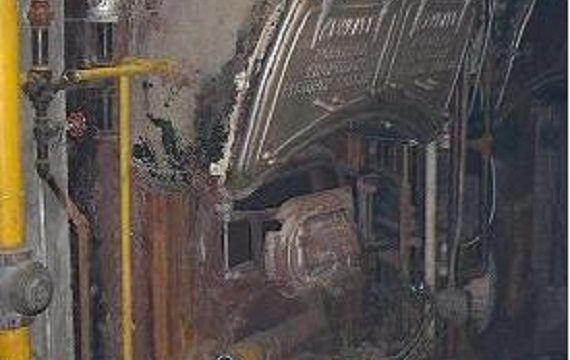 The Scottish Rite Cathedral had two Kewanee Model 318, low pressure steam locomotive style boilers, which were built in 1921 and had been retro-fitted with Iron Fireman gas burners back in the 1960s’. These original boilers were removed from the basement of the facility and replaced with a new Burnham boiler/Riello burner packaged scotch boiler.
The old boilers had served the facility well for many years, having been originally fired with coal, then heavy oil and finally, natural gas.

The new Burnham boiler is 125 h.p., low pressure steam, scotch design, fired by a Reillo RS 130/M, on natural gas. In addition to the boiler package, we have provided a BFS Industries, boiler feed set and Combustion Technologies boiler and building control system.
The savings when replacing atmospheric based burner systems with power fired burners, and when eliminating the draft losses that are common in the old boilers that are designed for coal firing, are in the 25 – 50% range. In this case, as a result of the conversion to power fired, the reduction of draft loss, the elimination of off-cycle loss, the re-control of the steam distribution and the elimination of uncontrollable air infiltration into the boiler, we will expect a savings of approximately 40 – 45%.

In addition, the burner now operates at turn-down of approximately 10 to 1 with Riello linkage free controls; the O2 level is down to a much more efficient 5.0% or less throughout the operating range; and the burner/boiler package has current flame supervision and safety controls.